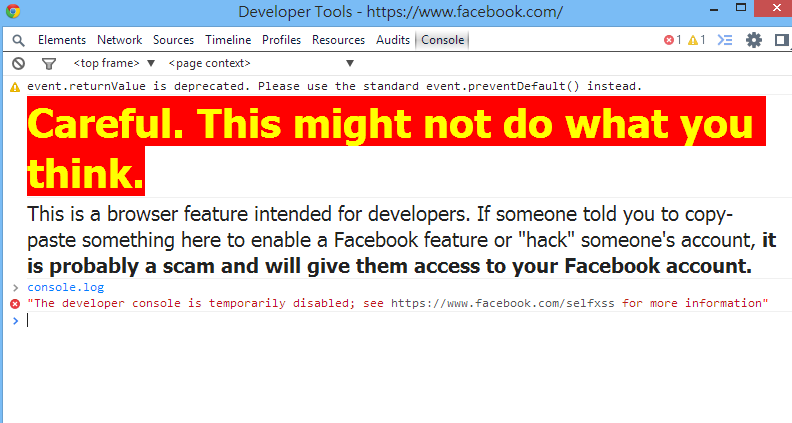 How did they do that?? One Stack Overflow post claimed that it is not possible, but Facebook has proven them wrong.

Just go to Facebook and open up the developer tools, type one character into the console, and this warning pops up. No matter what you put in, it will not get executed.

How is this possible?

They even blocked auto-complete in the console: 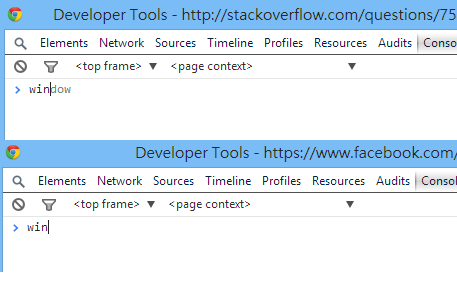 I’m a security engineer at Facebook and this is my fault. We’re testing this for some users to see if it can slow down some attacks where users are tricked into pasting (malicious) JavaScript code into the browser console.

Just to be clear: trying to block hackers client-side is a bad idea in general; this is to protect against a specific social engineering attack.

If you ended up in the test group and are annoyed by this, sorry. I tried to make the old opt-out page (now help page) as simple as possible while still being scary enough to stop at least some of the victims.

The actual code is pretty similar to @joeldixon66’s link; ours is a little more complicated for no good reason.

Chrome wraps all console code in

… so the site redefines console._commandLineAPI to throw:

This is not quite enough (try it!), but that’s the main trick.

Epilogue: The Chrome team decided that defeating the console from user-side JS was a bug and fixed the issue, rendering this technique invalid. Afterwards, additional protection was added to protect users from self-xss.